What to Do Before the Next Federal Reserve Meeting 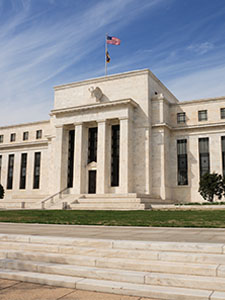 The next Federal Open Market Committee (FOMC) meeting will take place on Nov. 2-3, 2021. And this one could be big. FOMC meetings were relatively mundane for about a year and a half. The benchmark interest rate remained near zero, asset purchases stayed strong, and the Federal Reserve was “committed to using [its] full range of tools to support the economy,” said Federal Reserve Chairman Jerome Powell. Now, the economy is in a much better place, and many economists believe that the Federal Reserve is about to shake things up.

After the COVID-19 outbreak, the economy started to take a tumble. Unemployment soared. Inflation and GDP fell. Retail sales and consumer spending plummeted. To help keep the economy afloat, the Federal Reserve decided to implement its financial tools until it saw “substantial further progress.” Two of its most impactful tools are asset purchases and the benchmark interest rate. Asset purchases (such as Treasury securities and mortgage-backed securities) help the economy by reducing long-term interest rates, which makes borrowing money cheaper and encourages spending. The benchmark interest rate, also known as the reference rate, is used as a reference or baseline for other rates. Since March 2020, the Federal Reserve has kept the benchmark interest rate at a range of 0% to 0.25%. Since June 2020, the Fed has been buying a combined $120 billion in Treasury securities and mortgage-backed securities (MBS) each month.

Where are we now?

These boosts from the Federal Reserve have helped the economy pick back up faster than expected. Inflation levels are trending up. Consumer spending and retail sales have shown a surprising consumer resilience in the face of coronavirus and Delta variant fears. Labor markets recovered – and grew – very quickly. “Many on the [FOMC] feel that substantial further progress test for employment has been met,” said Powell in post-meeting press conference last month. “I guess my own view is the test for substantial further progress on employment is all but met.” The final reports that could affect the Federal Reserve’s plan going forward are the jobs reports that have been released over the past two weeks and the Job Openings and Labor Turnover Survey (JOLTS) released today. However, even these reports have little chance of swaying the Fed’s decision. “For me it wouldn’t take a knockout, great, super-strong employment report,” said Powell. “It would take a reasonably good employment report for me to feel like that test is met.”

Where are we headed?

Many financial experts see a taper in our near future. A taper is when the Fed starts pulling back on the amount of asset purchases. Mike Fratantoni, chief economist at the Mortgage Bankers Association, believes that the FOMC’s September discussion “has all but committed the central bank to announcing a taper at its next meeting in November.” The actual tapering is expected to start in December. “Participants generally view, so long as the recovery remains on track, a gradual tapering process that concludes around the middle of next year is likely to be appropriate,” said Powell. As for rate hikes, there is no clear liftoff date just yet. During his press conference, Powell repeated that the Federal Reserve’s asset purchases “will not be intended to carry a direct signal regarding the timing of interest rate liftoff.” However, the Committee did mention that it expects six to seven rate hikes through 2024.

How can you prepare?

When the Federal Reserve officially announces their tapering plan, mortgage rates will undoubtably rise. “The pending taper and change to the monetary policy outlook will likely contribute to a modest increase in mortgage rates over the medium term,” Fratantoni said. Many experts suggest that homeowners and home buyers lock in their rates before the Fed announces the taper. Locking in your mortgage rate while they’re still low can save you thousands of dollars in interest over the life of your loan. Learn more about the benefits and steps of refinancing in our refinance guide.

To see how much you could save by locking in your rate now, contact us.